Report of Goma from the Eyes of a Guest

We have completed January Goma with the most unusual weather phenomena. The forecast called for mid 40s as it had been all week but we woke up to a magical snowstorm…all in all about 4 inches of snow before the skies became clear just before Goma. Then, just as the Goma was ending we had a blizzard with probably close to 30mph wind, and then magically right after the ceremony, the skies cleared giving way to the 13th day of the new moon which we saw as a bright full moon on a bitter cold night. 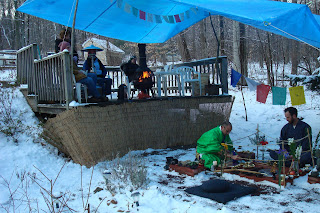 Our special guest, Mr Adam Bradley, took some time to write of his experiences. Please enjoy his essay and some pictures.

If you have never heard of the Goma, it is a traditional Japanese Buddhist fire ceremony that offers practitioners an opportunity release and cleanse unwanted thoughts and habits as well as the chance to offer wishes or prayers for any purpose. I had the unique opportunity to participate for my first time on this 28th of January, Fudo Myo’s day. Preparations were readied for the ceremony early in the day and now the mood was relaxed as the dojo cho arrived on the outdoor deck to greet guests. There were four guests that made the trip from nearby cities on this blistering day to the fairly remote location in the Connecticut woodlands. The forested residence where the Goma is held each month sits adjacent of a two thousand acre state park, a forested wonderland in which the recently fallen snow powdered the hilled topography. A lull in the stormy weather offered an opportunity for guests to enjoy tea and mochi (Japanese rice cake) while preparing wishes on small pine sticks in advance of the ceremony.

When my trip was planned two months previously it was suggested we schedule the trip so I could participate in the Goma. But the reason for my trip would be much more than a spiritual vacation. Two years previously I had sculpted a three foot tall Fudo Myo, the main deity of the fire ceremony, from a single piece of western red cedar with a backdrop of flames sculpted from old growth redwood. Since then the combination of weather extremes and sun exposure had deteriorated the wood finish on the outdoor sculpture. So it was decided that a trip should be scheduled to refurbish the wood sculpture and create a more permanent outdoor housing to prevent future damage due to extreme weather conditions. 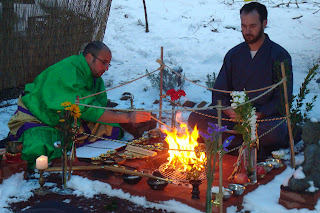 Ive been hearing about the goma since completing the Fudomyo Zou in 2008 and now I had the chance to participate. The Ceremony opened with a traditional Japanese Shinto purification, called Kiyomeharae. I have experienced this practice many times over the years while visiting my sensei at Tsubaki Grand Shrine of America, a Shinto shrine in upper Washington state. During this process the entire space is purified using salt, special sand and clean white paper flakes along with Sake which are thrown to the four corners pacifying the space for the spiritual the undertaking 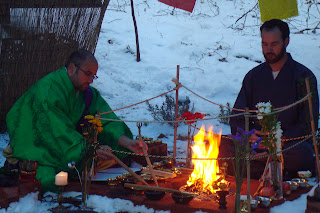 Now the Buddhist Ceremony would begin and the weather still very cold, in the 20s, but the sun still shined brightly through sparse clouds. I took my place at the side of the Goma alter where many small brass dishes filled with variety of food offerings and such. The Dojo cho made his appearance adorned in bright green Japanese robes, readied himself, lit incense and began the incantations to further purify and open a clean space for the Kami/Deity. When the fire was finally struck and the prayer sticks began to burn, the intensity increased exponentially till the chants for Fudyo myo ushered the first climactic event. The sky turned sapphire hues as the sun began to set and clouds rolled in with so many large snow flakes beginning to fall. Earlier in the day we had erected a tarp to provide shelter for just this occasion, and as we would find, it was so good to have it.

Now the Ceremony was coming to a close and the incantation of Japanese prayers began again for one last round of fire and offerings. As the sacred fire grew so did the intensity of the weather and dark clouds billowed over the mountain with wind gusts and intense snow to stir our concentration. And then a most unlikely thing occurred, as if conjured by the chanting, a billowing thunder roared over the mountain. Blizzard conditions pursued for what seamed like an eternity and was gone as quickly as it arrived. The fire dimmed and ceased. With all the prayer sticks burned and offerings had, the ceremony was completed. The remaining guests sat persistently by a waning fire and propane heaters, chilled by the blistering cold but very happy to have participated and so was I. We retired to our guests home for tea and warmth to discuss the unique ceremony and events that transpired. Such a neat experience to usher the work that would be completed over the next week. 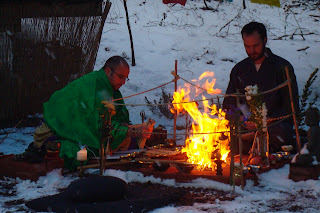 This entry was posted in news. Bookmark the permalink.